Factors Influencing Compliance to Procurement Laws and Regulations in County Governments: A Case of Embu County

The Public Procurement and Asset Disposal Act, 2015, operationalizes Article 227 of the Constitution; to provide procedures for efficient public procurement and for assets disposal by public entities; and for connected purposes. With the introduction of devolved system of governance, business pressures are ever increasing and public entities are now faced with persistent public outcry over poor procurement performance. This study scrutinized the factors influencing compliance to procurement laws and regulations in Embu County Government. Across section descriptive research design was applied targeting procurement officers, county directors and accounts staff giving a sample size of 30 respondents. A stratified random sampling procedure was used to overcome the problem of skewed sampling associated with purposive sampling. The research project was guided by research questions based on the variables aforementioned. Data was collected by use of the questionnaire and analysed using Statistical package for Social sciences (SPSS) software to generate frequency tables. Responses were provided in a Likert scale. Statistics were presented in descriptive form supported by frequency counts and percentages. The findings of the study revealed that professional ethics, staff awareness and budgetary allocation influence compliance to procurement laws and regulations. Staff were aware and trained on public procurement and asset disposal Act, 2015. However, they lacked information and training on procurement code of ethics. It is therefore recommended that the County develops, trains staff and institutionalizes procurement code of ethics. Furthermore, budget allocation to various departments should take considerations of pending bill and such bills should be forwarded to County Assembly for budget formulation.

Procurement in the public sector has become an issue of greater importance. According to Roodhooft and Abbeele (2006), public bodies have always been big purchasers, dealing with huge budgets. Frøystad et al., (2010) further noted that public procurement represented a global average of 12-20 % of public spending. This was corroborated by Mahmood, (2010) who said that public procurement represents 18.42% of the world GDP. The study was conducted in Embu County, one of the forty-seven (47) devolved units of governance in Kenya. The County number fourteen (14) borders Kirinyaga to the west, Kitui to the East, Tharaka Nithi to the north and Machakos to the South.

According to PPADA, (2015), public procurement means procurement by procuring entities using public funds while procurement means the acquisition by purchase, rental, lease, hire purchase, license, tenancy, franchise, or by any other contractual means of any type of works, assets, services or goods including livestock or any combination and includes advisory, planning and processing in the supply chain system. Hui et al. (2011) while analyzing procurement issues in Malaysia established that procurement officers were blamed for malpractice and non-compliance to the procurement policies and procedures. Citing Yukl (1989), Gelderman et al. (2006) stipulate that compliance occurs when the target performs a requested action, but is apathetic about it, rather than enthusiastic, and puts in only a minimal or average effort. However, as an organizational outcome, compliance has traditionally been understood as conformity or obedience to regulations and legislation (Snell, 2004) cited in Lisa, (2010).

In developing countries, public procurement is increasingly recognized as essential in-service delivery. It accounts for a high proportion of total expenditure. For instance, public procurement accounts for 60% in Kenya (Migai, 2005), 58% in Angola, 40% in Malawi and 70% of Uganda’s public spending (Basheka and Bisangabasaija, 2010). This is very high when compared with global average. Due to the colossal amount of money involved in government procurement and the fact that such money comes from the public, there is need for accountability and transparency, (Hui et al. 2011).

Demand for prudence in public spending has seen various countries introduce myriad of changes relating to procurement laws and regulations. However, compliance to these legislations remains to be a major challenge. De Boer and Telgen (1998) confirmed that non-compliance problem affects not only the third world countries but also countries in the European Union. This position is further supported by Gelderman et al. (2006) who contend that compliance in public procurement is still an issue of greater concern.

Taking the case of Uganda for instance, despite a wave of procurement reforms that begun in 1997, and culminating into the enactment of the Public Procurement and Disposal of Public Assets (PPDA) Act 2003, many government ministries and agencies have not since then followed prescribed practices (Agaba & Shipman, 2007). Audit checks reveal that compliance in public procurement in Uganda is still inadequate (World Bank, 2001).

According to Kenyanya et al. (2011), Kenya has undergone significant development in the past five decades. The country lacked a legal framework at independence. In the 1970s to 1990s, it operated using circulars from treasury. The first procurement regulations were introduced in 2006. Many studies were carried out on procurement before the Public Procurement and Disposal Regulations of 2006 to evaluate the efficiency of the procurement process in existence at the time, (Kipchilat, 2006). The major findings of the studies were that public procurement was not operating efficiently and that the state was losing a lot of money through shoddy deals.

The gazettement of this legal framework in 1st January, 2007 introduced new standards for public procurement. The principal reason for the enactment of the Act was to have a legal regime that weeds out inefficiencies in the procurement process, remove patterns of abuse, and the failure of the public purchaser to obtain adequate value in return for the expenditure of public funds. However, these objectives have never been fully achieved in practice, (Wanyama, 2010). He further noted that key provisions of the Act and the Regulations are replete with textual weaknesses that have often been abused by procuring entities. The regulations do not envisage contemporary market realities hence the need to continuously revise them to keep pace with these developments.

Following the promulgation of Constitution of Kenya in 2010, public procurement was entrenched in Article 227, which states that when a state organ or any other public entity contracts for goods or services, it shall do so in accordance with a system that is fair, equitable, transparent, competitive and cost- effective, (Kenya, 2013). This led to repealing of PPDA 2005 and enactment of the Public Procurement and Assets Disposal Act (PPADA) of 2015.

The PPADA established the procurement methods, advertising rules, time taken for procurement process, the content of tender documents and technical specifications, tender evaluation and award criteria, procedures for submission, receipt and opening of tenders, and the complaints handling structure. Besides the PPADA, a number of statutes also have provisions that regulate public procurement processes in Kenya. These include the Anti-Corruption and Economic Crimes Act 2003 (ACECA- Article 45, clause (2), Public Officer Ethics Act 2003, Article 12 clause (2).

Despite the existence of a strong legal framework to guide public procurement in Kenya, the process is still shrouded with non-compliance. Therefore, this study was conducted to examine the influence of Professional Ethics on compliance to procurement laws and regulations in Embu County Government.

This study adopted a descriptive research design. A population of thirty (30) staff from various sections of Embu County Government was selected using stratified random sampling. The data collection instrument used was a questionnaire designed using variables identified as important for meeting the survey objectives. Both closedended and open-ended questions were administered to the respondents and data obtained analyzed. Data analysis process included data sorting, editing, coding, or variable generation, data entry, cleaning, processing and interpretation of results. The SPSS tool was used to analyze data. Descriptive statistics which include frequencies and percentages were used. Quantitative data was presented using tables and chats while qualitative data was presented in narrative form.

From table 3.1 fifty-eight percent (58%) of the respondents were female and thirtysix percent (36%) were male. Six percent (6%) did not respond. From the findings it was clear that the County had implemented the one third gender rule. 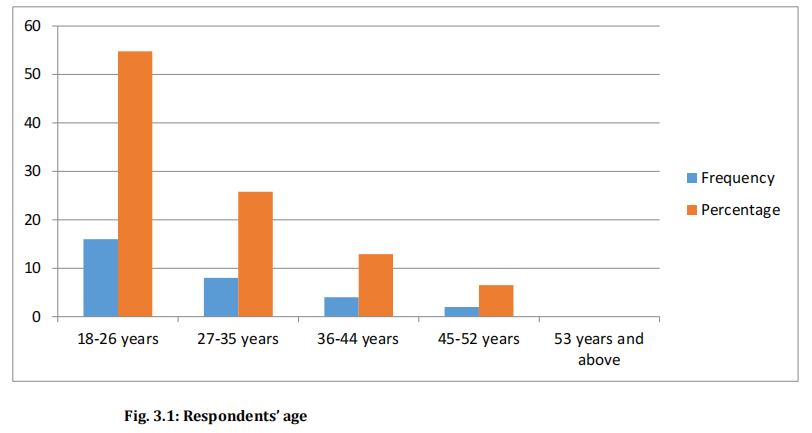 From table 3.2 sixty-one percent (61%) of the respondents had worked for less than two (2) years, twenty-three percent (23%) for 6-9 years, thirteen (13%) for 2-5 years while three percent (3%) had worked for over 10 years. Majority of the staff have limited experience therefore there is need for training and coaching.

From fig.3.2 fifty-five percent (55%) of the respondents had undergraduate degree, forty-two percent (42%) diploma and three percent (3%) had Master’s degrees. 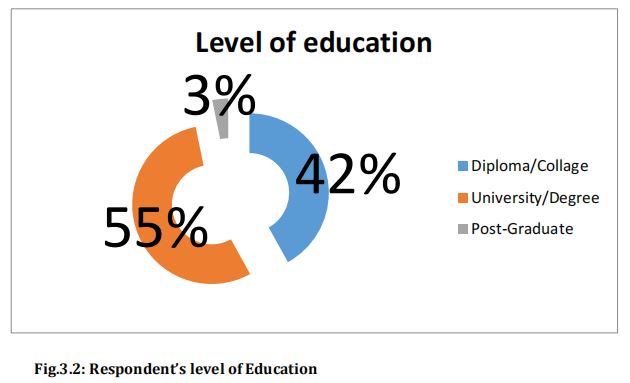 From table 3.3 sixteen percent (16%) of the respondents strongly agreed that there is procurement Code of Ethics in Embu County Government. Seven percent (7%) agreed while seventy-seven percent (77%) were not sure.

Concerning adherence of Embu County staff to procurement Code of Ethics, thirteen percent (13%) of the respondents strongly agreed, nineteen percent (19%) agreed, three percent (3%) disagreed while sixty-five percent (65%) were not sure.

It was further found out that ten percent (10%) of the respondents strongly agreed that staff had been trained on Procurement Code of Ethics, nineteen percent (19%) agreed, three percent (3%) were not sure, seven percent (7%) disagreed while sixtyone percent (61%) strongly disagreed. 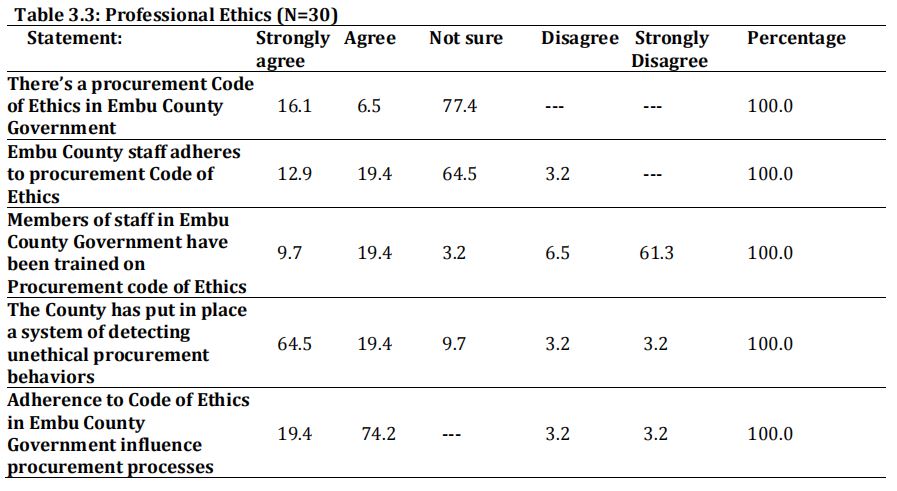 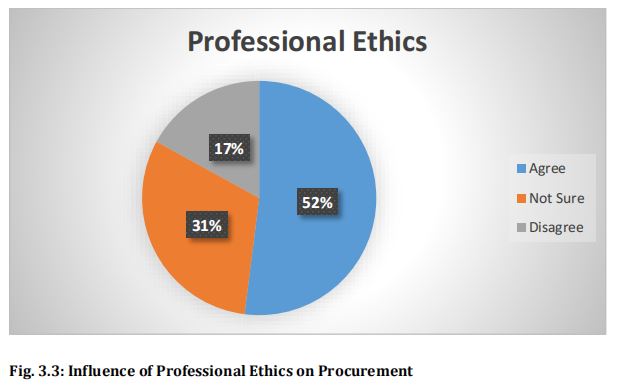 The targeted sample size was 30 respondents. The data was collected by means of questionnaires and was then entered into the Statistical Package for Social Sciences (SPSS) software to enable the final analysis of the data. The descriptive statistics made use of statistical indexes such as frequencies and percentages. The analyzed data was finally presented in the form of figures, charts and tables.

From the findings it was deduced that majority of the respondents were not sure about the existence of the Procurement Code of Ethics and they were not trained on the same. Therefore, this is an indication that the County Government lacked internal controls to promote adherence to the procurement laws and regulations.

Although the County lacked procurement code of ethics, majority of the respondents agreed that the County Government had put in place a system of detecting unethical behaviors. This could mean that there might be other mechanisms of detecting unethical behaviors besides the Code of Ethics. Overall findings therefore revealed that the respondents were in agreement that professional ethics influences compliance to procurement laws and regulations in Embu County Government.

Migai, A. (2005). Development Partners and governance of Public Procurement in Kenya: enhancing Democracy in the Administration of aid. International Law and Politics, 37.

Kipchilat, G.T (2006) “An Evaluation of the Impact of the Public Procurement Regulations on Procurement in Kenyan Public Universities.” Unpublished MBA Project. Egerton University.

Mahmood, S. A. I. (2010). Public procurement and corruption in Bangladesh. Confronting the challenges and opportunities. Journal of public administration and Policy research, 2(6), 103-111.

Wanyama, J (2010). The effectiveness of the Procurement Regulations in Kenya. Available on http:/www.oecd.org

We thank The Almighty God for giving us this opportunity to undertake this research work, our various organizations and families, Kenya School of Government, Embu Campus. We appreciate their support towards the achievement of this professional training in Senior Management Course. We acknowledge the role played by our supervisor, Mr. Joseph Nyerere and all the team members of this group for their invaluable contributions towards this research project.

There was no financial support for this article.

The authors declare that there are no conflicts of interest.

This study does not contain any studies with human participants or animals performed by any of the authors. Research authorization was sought from the director Kenya School of Government. 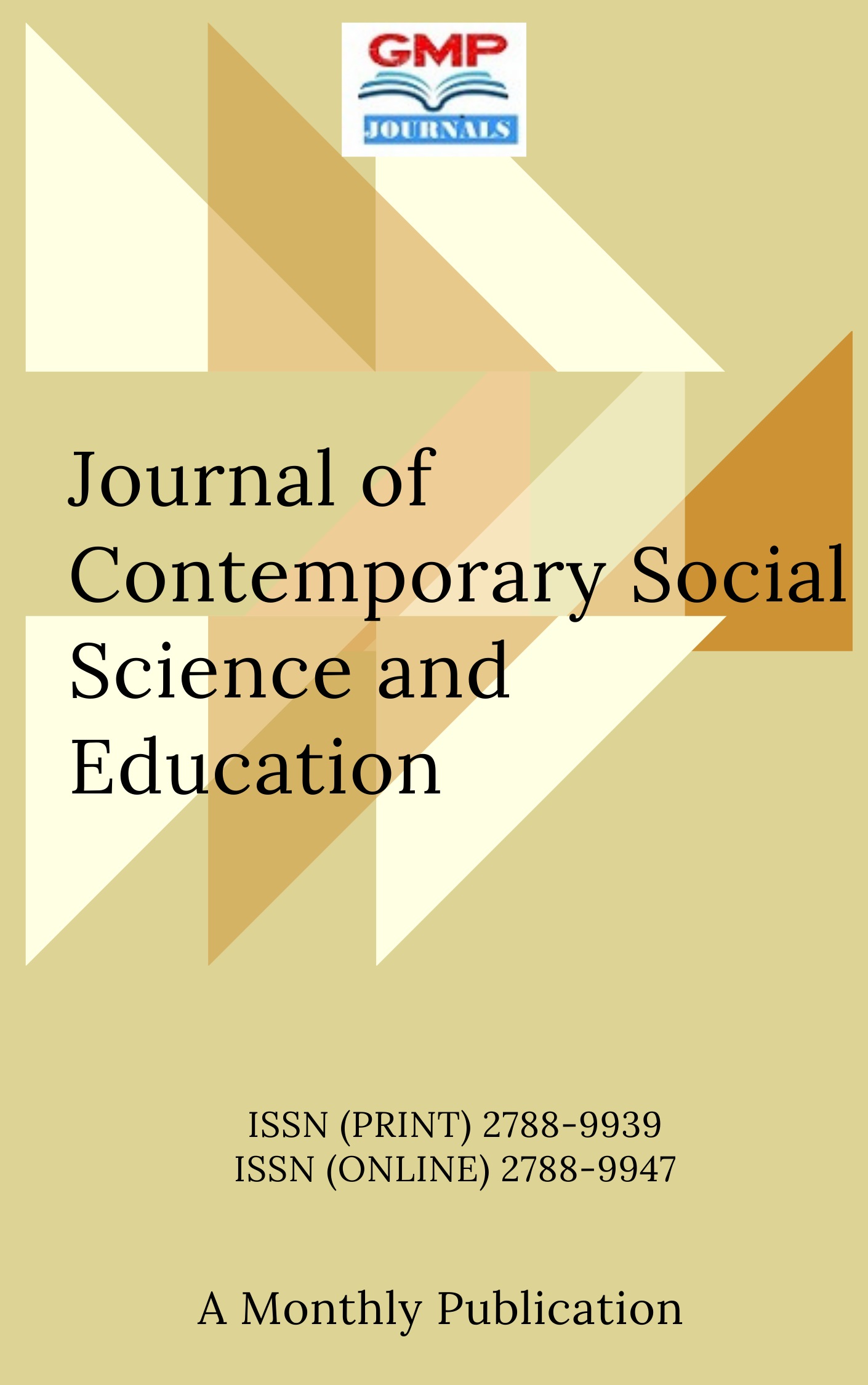